Your browser does not support the running script, you cannot get a perfect browsing
Bhutan Join-in Group Tours
Home 

This four-day Bhutan tour package helps you land in Paro and experience the Himalayan culture, hospitality, and a gentle Paro-Thimpu-Paro tour. Officially the Kingdom of Bhutan is a landlocked country in South Asia. Located in the eastern Himalayas, it borders the Tibet Autonomous Region of China in the north, Sikkim in India and the Chumbi Valley in Tibet in the west, Arunachal Pradesh in India in the east, and Assam and Assam in the east. the southern state of West Bengal. Bhutan is the only carbon-negative country in the world.

On a 4-day tour of Bhutan, you will experience the cultural vitality and natural magnificence inherent in Bhutan. Your Bhutan tour starts in the beautiful city of Paro, Bhutan tour packages are specially designed to satisfy nature and culture lovers, during these four days you will visit and trek to the incredible Tiger's Den Temple. Afterward, we will also visit the statue of Buddha Dodenma, the National Memorial Chorten, Tashichho Dzong, and the Takin zoo, Folk Heritage Museum.. Read on this page to learn more about a four-day trip to Bhutan that impresses you!

Tashi Delek and welcome to Bhutan. Our local representative will greet you at the only international airport in Bhutan that is located in Paro(2262m), Western Bhutan. Then check in at your sweet hotel for a good rest while getting used to the time difference.

Today we will drive from Paro city to the start point of the hiking route of the Tiger's Nest Monastery. It takes about 2.5 hours to reach Tiger's Nest by foot (5 hours for a round trip), and you can have a rest at the view terrace which is located at the halfway point of the hiking road. Also, you can choose to ride a horse(self-paying) from the camp base to the Taktsang Cafeteria (lunch spot). In the evening, enjoy the welcome dinner with Bhutan Culture Dance Show in Paro.

Tiger's Nest Monastery (Taktsang Goemba, Takhtsang Lakhang, Paro Taktshang), first built in 1692, is the iconic landmark of Bhutan. As a world cultural heritage, it is sited on the side of a cliff at a height of 900m above the Paro Valley. It is said that Guru Rinpoche (a Buddhist saint) rode a tigress to the current site of the monastery and meditated in a cave for 3 years 3 months and 3 days. Now it is one of the most visited tourist attractions in Bhutan and a sacred religious site for Bhutanese to pilgrimage at least once in a lifetime.

In the morning, we will head to Bhutan’s capital city Thimphu (72km, about 2.5h) via a visit to Tamchog Lhakhang on the way. After sightseeing in Thimphu (2360m) with Buddha Dordenma Statue, National Memorial Chorten, Motithang Takin Preserve, and Tashichho Dzong, we will have dinner in the Folk Heritage Museum (based on the group over 5Pax). Then have a good rest in your hotel.

Tamchog Lhakhang (Tachog Lhakhang) is located by the Paro river on the way to Thimphu from Paro. To get to the temple we must walk across a unique iron chain bridge with colorful fluttering prayer flags. Both the Lhakhang and the iron bridge are built by the saint Thangthong Gyalpo (1385-1464, Tibetan polymath). As the "King of the Empty Plain", Thangthong Gyalpo is now commonly known as the "Iron Bridge Maker". Enjoy his pioneering old-aged buildings left till today.

Motithang Takin Preserve (Takin Zoo) is a wildlife reserve for Takin (Budorcas taxicolor), the national animal of Bhutan. Drukpa Kunley (Divine Madman), the famous Tibetan saint, is said to be responsible for the creation of Takin which has the head of a goat and the body of a cow.

Time to say goodbye to Bhutan, the beautiful Himalayan country. Our local representative will meet you at your hotel and send you to the Paro International Airport(50km,1.5h). Happiness is a place, wish you had to get the happiness and great memories from the Bhutantrip with us. We look forward to seeing you again, Tashi Delek!

Note:
Please note that some of the sites in the itinerary may change due to season, weather, national holidays, and special events. We maintain the right to alter the itinerary. The changes in itinerary will mainly base on improving your tour experience in Bhutan. 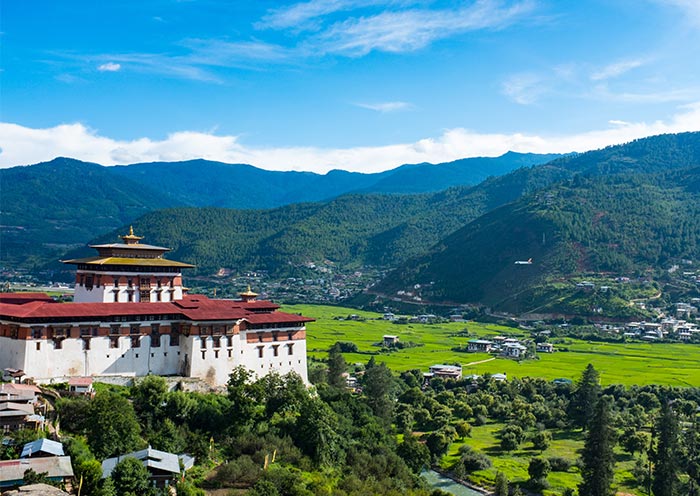