Your browser does not support the running script, you cannot get a perfect browsing
Bhutan Tour Packages
Home 

Tashi Delek and welcome to Bhutan. Our local representative will greet you at the only international airport in Bhutan that is located in Paro(2262m), Western Bhutan. Later we will head to Thimphu (50km, about 1.5h) via the sightseeing to Tamchog Lhakhang Iron Bridge, Buddha Dordenma Statue, National Memorial Chorten, Simtokha Dzong, and Bhutan Post Office Headquarters. Then check in at your sweet hotel in the capital city for a good rest while getting used to the time difference.

Tamchog Lhakhang (Tachog Lhakhang, Tamchog Lhakhang Iron Bridge) is located by the Paro river on the way to Thimphu from Paro. To get to the temple we must walk across a unique iron chain bridge with colorful fluttering prayer flags. Both the Lhakhang and the iron bridge are built by the saint Thangthong Gyalpo (1385-1464, Tibetan polymath). As the "King of the Empty Plain", Thangthong Gyalpo is now commonly known as the "Iron Bridge Maker". Enjoy his pioneering old-aged buildings left till today.

Simtokha Dzong (Sangak Zabdhon Phodrang) was built in 1629 by Zhabdrung Ngawang Namgyal, who unified Bhutan. It is the first of its kind built in Bhutan. Simtokha Dzong in Bhutanese language meaning: "Palace of the Profound Meaning of Secret Mantras" is a small dzong. It is an important historical monument and former Buddhist monastery, today it houses one of the premier Dzongkha language learning institutes.

Bhutan Post Office Headquarters (the General Post Office) is located near Changlam Square in Thimphu. It is home to the world's largest photo book and the most interesting collection of Bhutanese stamps. Only in this post office, you can get your personalized stamps (the stamp of your face). Great surprise to send your family and friends a postcard with your face on the stamp! (Open from Monday to Saturday from 9:00 to 17:00 during Summer and 9:00 to 16:00 during Winter. Do note that it is closed for lunch from 13:00 to 14:00).

Today, we will explore Bhutan’s capital city Thimphu through Takin Sanctuary, Folk Heritage Museum, School of Arts and Crafts, Trashichho Dzong, Zilukha Nunnery, and Jungshi Handmade Paper Factory. Then have a good rest in your hotel.

Motithang Takin Preserve (Takin Sanctuary, Takin Zoo) is a wildlife reserve area for Takin (Budorcas taxicolor), the national animal of Bhutan. Drukpa Kunley (Divine Madman), the famous Tibetan saint, is said to be responsible for the creation of this unique creature called Takin which has the head of a goat and the body of a cow.

Zilukha Nunnery (Drubthob Goemba Monastery) lies on the slopes of Thimphu and is above the Golf Course. Founded in 1976 by Rikel Jadren, an emanation of Thangthong Gyalpo from Tibet, it was designed in traditional Bhutanese fashion. Houses with around to 70 nuns, it is the biggest nunnery in Bhutan. A visit to the site can give you good chance to know about their lifestyle and get a nice view of the Tashichho Dzong.

Today, we will depart Thimphu (2360m) and drive to Punakha (74km, about 2.5h) via Dochula Pass, Wangduephodrang Dzong, and Chimi Lhakhang. When arrive Punakha you can have a visit to Punakha Dzong and .

Dochula Pass (108 memorial chortens) is a place in honor of 108 Bhutanese Soldiers, there are 108 stupas called the "Druk Wangyal Chortens" representing each soldier's life that was lost in the war of December 2003. The pass is decorated with colorful prayer flags which are symbols of veneration and the best wishes for peace and prosperity for Bhutan. If the weather is good, the Dochula Pass will become the best platform to get breathtaking views of the snow-covered Himalayas.

Wangdue Phodrang Dzong (Wangdi) was founded in 1638 by Ngawang Namgyal (1594-1651), the national unifier of Bhutan, who was later dubbed the first Zhabdrung Rinpoche. The dzong is ideally placed for defense which atop a high ridge between the Punak Tsang Chhu and the Dang Chhu, clearly chosen for its commanding view of the Punakha river valley. The prominent position of the dzong and its imposing demeanor underscored the authority of the Zhabdrung in both civil and religious affairs.

Chimi Lhakhang (Fertility Temple, Chime Lhakhang) is located on a hillock among the rice field and is a pilgrimage for a childless couple to seek blessings. The monk there blesses the couple with a wooden phallus that is believed to have the power to help the childless couple conceive a child. This temple is associated with the famous Drukpa Kunley (1455-1529, Divine Madman, Tibetan saint), who is famed for using his phallus to guide people to enlightenment and subdue demons. That is why you can see the symbol of phalluses scattered everywhere. You can buy handicraft souvenirs here with the phallic symbol in various colors, shapes, and sizes.

Punakha Dzong stands at the junction of two great rivers called the Pho Chu river (father river) and Mo Chu river (mother river). As the palace of great happiness or bliss, it is also known as the most beautiful Dzong in Bhutan. It was first built in 1637 by the founder of Bhutan, Shabdrung Ngawang Namgyel, and was played as the administrative center and the seat of the Bhutanese official till the capital city was moved from Punakha to Thimphu in 1955. Now, this Dzong is served as the winter residence for Je Khenpo, Chief Abbot of the Central Monastic Body. In 2011, the Dzong witnessed the royal wedding ceremony of the 5th Bhutan's King, His Majesty Jigme Namgyel Wangchuck to Queen Jetsun Pema. If you visit Bhutan in May, you will be amazed by the breathtaking purple-blue jacaranda blooms outside the fortress.

This morning we will visit Khamsum Yueley Namgyal Chorten before driving back to Paro from Punakha (115km, about 2.5h). In the afternoon, explore Kyichu Lhakhang near Paro.

Khamsum Yulley Namgyal Chorten is on the west bank of the Mo Chhu river. After across a suspension bridge, it is about 45mins' walk from the main road to the Chorten(stupa). The stupa was built in 1990 by Ashi Tsering Yangdon Wangchuck(the wife of King Jigme Khesar Namgyel Wangchuck) to drive off evil forces and bring peace to Bhutan and the world. This Chorten was a typical combination of the art, architecture, and traditions of Bhutan. It took Bhutanese carpenters, painters, and sculptors 9 years to finish this Bhutan-style pagoda. Also, you will get an excellent view of the Punakha Valley and Punakha Dzong there.

Kyichu Lhakhang is one of the oldest monasteries that marks the beginning of Buddhism in Bhutan. It was built in 659AD by King Songtsen Gompo (Tibetan Emperor) as one of the 108 monasteries he made. In 1971 a Guru Temple was added by Her Majesty Azhi Keshang Choden Wangchuck, the wife of the Third King of Bhutan. You can see the original 7th-century Jowo Sakyamuni Statue (the same era as the one in Lhasa's Jokhang Temple) and Chenrezig with 11 heads and 1000 arms there. There is also a magical orange tree outside the courtyard that is said to bear fruits all year round.

Today we will drive from Paro city to the start point of the hiking route of the Tiger's Nest Monastery. It takes about 2.5 hours to reach Tiger's Nest by foot (5 hours for a round trip), and you can have a rest at the view terrace which is located at the halfway point of the hiking road. Also, you can choose to ride a horse(self-paying) from the camp base to the Taktsang Cafeteria (lunch spot). Then visit Ta Dzong after trekking. Farewell dinner with Bhutan Culture Dance Show in Paro.

Tiger's Nest Monastery (Taktsang Goemba, Takhtsang Lakhang, Paro Taktshang), first built in 1692, is the iconic landmark of Bhutan. As a world cultural heritage, it is sited on the side of a cliff at a height of 900m above the Paro valley. It is said that Guru Rinpoche (a Buddhist saint) rode a tigress to the current site of the monastery and meditated in a cave for 3 years 3 months and 3 days. Now it is one of the most visited tourist attractions in Bhutan and a sacred religious site for Bhutanese to pilgrimage at least once in a lifetime.

National Museum of Bhutan (Ta Dzong) is famed as Bhutan's tallest building (a cylindrical structure), which is 22 meters (72 feet) high and has 6 floors. It was completed in 1649 as a watchtower on the hill above the Rinpung Dzong (Paro Dzong). It was converted into the National Museum of Bhutan in 1968 with a rich collection of ancient artifacts like pottery, armor, thangkas, masks, stamps, photos, statues, costumes, relics, stone axes, and religious paintings...

Time to say goodbye to Bhutan, the beautiful Himalayan country. Our local representative will meet you at your hotel and send you to the international airport. Happiness is a place, wish you get happiness and great memories from the Bhutantrip with us. We look forward to seeing you again, Tashi Delek!

Note:Please note that some of the sites in the itinerary may change due to season, weather, national holidays, and special events. We maintain the right to alter the itinerary. The changes in itinerary will mainly base on improving your tour experience in Bhutan. 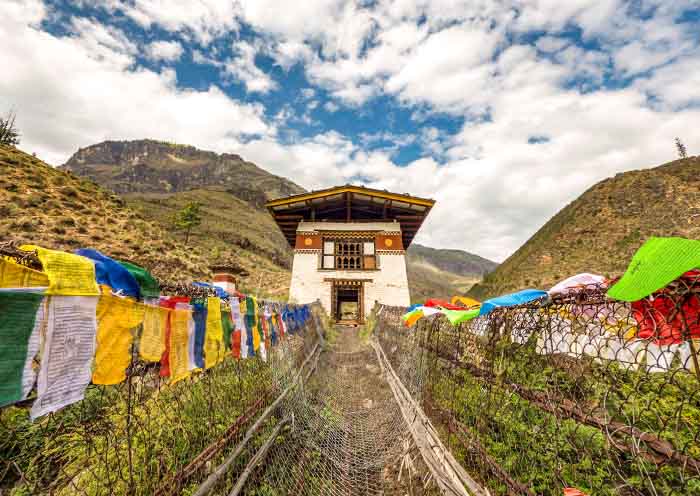