A sparsely populated country bordered by India to the south, and China to the north, Bhutan has long maintained a policy of strict isolationism, both culturally and economically, with the goal of preserving its cultural heritage and independence. The local unique customs in Bhutan include the aspects below.

Men wear a heavy knee-length robe tied with a belt, called a gho, folded in such a way to form a pocket in front of the stomach.

Women wear colorful blouses over which they fold and clasp a large rectangular cloth called a kira, thereby creating an ankle-length dress. A short silk jacket, or toego may be worn over the kira. Everyday gho and kira are cotton or wool, according to the season, patterned in simple checks and stripes in earth tones. For special occasions and festivals, colorfully patterned silk kira and, more rarely, gho may be worn.

Additional rules of protocol apply when visiting a dzong or a temple, or when appearing before a high-level official. Male commoners wear a white sash (kabney) from left shoulder to opposite hip. Local and regional elected officials, government ministers, cabinet members, and the King himself each wear their own colored kabney. Women wear a narrowly embroidered cloth draped over the left shoulder, a rachu.

Marriages are at the will of either party and divorce is not uncommon. The marriage ceremony consists of an exchange of white scarves and the sharing of a cup. Marriages can be officially registered when the couple has lived together for more than six months. Traditionally the groom moves to the bride's family home (matrilocality), but newlyweds may decide to live with either family depending on which household is most in need of labor.

In Asia, Bhutan is an unusual exception to the dowry custom which does not exist; inheritance is matrilineal, and daughters do not take their father's name at birth, nor their husband's name upon marriage. Rural land may be registered in a woman's name. Women own businesses, and both polyandry and polygyny are socially accepted, with polygyny being more prevalent.

In 1980, the Marriage Law was enacted, monogamy being introduced, while polygamy or child marriage being prohibited.

The staple foods of Bhutan are red rice, buckwheat, and increasingly maize. The diet in the hills also includes chicken, yak meat, dried beef, pork, pork fat, and lamb. Soups and stews of meat, rice, ferns, lentils, and dried vegetables, spiced with chili peppers and cheese, are a favorite meal during the cold seasons. When offered food, one says meshu meshu, covering one's mouth with the hands in refusal according to Bhutanese manners, and then gives in on the second or third offer. The Queen of Bhutan... 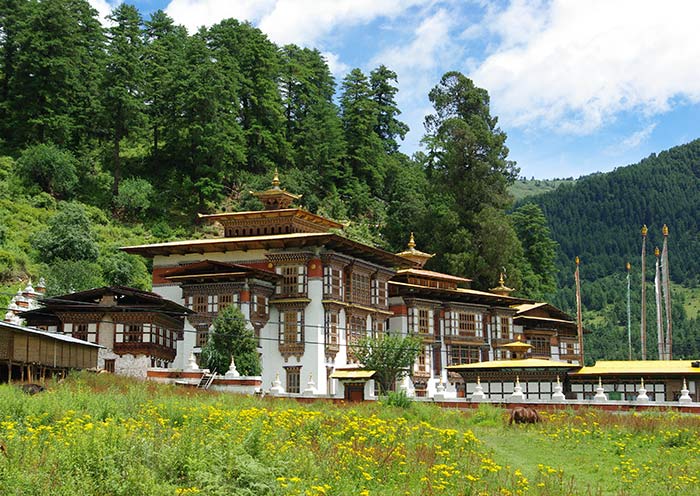